Where many small ideas pile into a big load!

Pulling away, Karem showed her another smile, different than all the smiles he had been showing. "I am, too."

He then stood up and stretched. "Well, I should let you rest for a little more while he takes care of my eye..."

Ivy smiled softly and nodded, her cheeks warm with a pink flush. "Aye... Thankies, then."

"I've had enough of this!" The chief of police stood from his desk, slamming his palms onto its wooden surface, causing everything on it to shiver with the impact. The other people around said chief started.

"We've managed to catch none of these assassins. None. And they are continuing to cause trouble!" He growled. "Our job is to protect the society, and that can't be done with these... These..." He searched for a word to describe the assassins and failed, so he flung himself into his seat. "Urg! And we can't rely on those ruffian bounty hunters anymore to sweep up this mess, either!" He snarled.

Yes... Serafina had made quite the impression. To have such a claim and to go to the place to find not only no one there, but poisoned air as well... Ah, the bounty hunters wouldn't be trusted for a while, even though it wasn't Serafina's intention.

A young police officer blinked at his chief then at his companion. They knew firsthand what destruction both the Bounty hunters and assassins could cause... Since they were on both the Countess's party and the Rose Hotel cases... Personally, the entire ordeal scared him, and he in fact was making plans with his wife, newly married, to move out of London entirely. However, if he was right about what was coming...

"We need to step it up a notch. No, more than that. We need to clean it up completely. What we 'ave been doing 'asn't been good enough! Edward! You and your companion were in charge of finding out information. So tell me, why haven't we gotten anywhere?"

"...They move quickly, sir. Whenever we arrive on the scene-"

"Then we need to move faster." The chief stated, drumming his fingers. "I'm going to give you another chance. Find out something relevant. Namely where these villains are hiding. And then we'll move in. Call the milit'ry if we have to. I'd say that they're enough of a threat to start a war against them. Oh, and if you see Serafina or any of her likes... Arrest them. I'll give you more police to be under you. As many as you need. Just find them."

Edward nodded stiffly. "...Sir." He replied, then walked out of the office. The young police officer followed suit. As soon as he was out of earshot, Edward stated "He only says that because those nobles being killed are the ones that pay 'em."

The young officer smiled weakly. "Prob'ly. He needs something to sit his fat ass on, after all."

(THE AUTHORITIES ARE ON THE MOOVE. o3o) 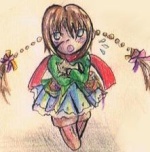 Kamen returned to Ivy's room about one hour later. Even though he still tried to hug her, kiss her, molest her, whatever, he was doing it half-heartedly. Of course the fact didn't escape Ivy's observation.

Replying to her questioning, Kamen displayed a grin. "We're going to have a meeting, darling. Almost all the Chameleons will reunite here, only for a fleeting moment. I have an order that none of them can afford to miss. The Chameleons are going on hibernation."

He turned his back to the bed and looked out to the sunlit garden. "... I can't risk it. Rosa, that assassin girl, put me in an uptight situation. Plus, the authorities seem to be on the move...." He flicked a pink piece of paper in his long, pale fingers. "Belle just submit a report."

Ivy blinked, before exclaiming. "Wai- What, really?! Hibernation?!" That really was the last thing she expected to be dropped on her lap, especially after she just woke up. "Report abouts what? What's going on?" She questioned critically.

Ivy might have expected Kamen to show her the piece of paper he was holding, but no, he folded it and slipped it inside his sleeve. "Belle's adopted father is kinda high-spirited. He swore to sweep out every single assassin in this city. The Duochromatics must also be aware of this, and I guess they'd react the same way as I am, given how cautious they are. I really don't want any of you to be hung like a rag doll."

Turning to Ivy with a smile, Kamen continued brightly. "Don't you want to take a break from killing? You guys've never had vacation~!"

"...Not reallys." Ivy grumbled silently, not pleased in the slightest. She enjoyed going off on hunts with Karem. She wasn't really sure what to do if she wasn't allowed that, except maybe take up dancing again like she did when she was still in Ireland. Even then, there wasn't the same thrill.

As if he'd read her thoughts, Kamen sent her a smile, "A dozen of bars in town should be thrilled to see an Irish folk dancer. I bet Karem won't mind to be your partner."

"Accch, how does you do that? Knows me so well?" She questioned, both in irritation and amusement. "...Rights, thanks Kamen... Hows long do we have to be in hiding, does you think?"

Kamen put a finger to his lips. "I took you in, honey, of course I'd learned about you. As for the second question... If nothing goes wrong, we can return after two months. Maybe three. You know the police, they're just bluffing. The government won't give them money to keep up with inefficient investigation forever."

"...Aye. That is a long times, though..." She said thoughtfully. She still didn't like the entire idea, but it didn't seem like she had a choice.

"You can always drop by for cupcakes." Kamen offered with a little smile.

With that, he left. He had to make sure that his guest, the blonde woman and her apprentice, were driven out before the Chameleons gathered.

"W-What-?" Iris stammered as guards filed in his workshop, shoved the parts and unfinished weapons into trunks, and carried them away. "What is the reason of this?"

Memphis said simply, "We're clearing the evidences. In one month or two's times, we'll bring them back. Don't worry. No Duochromatic is going to need weapons any time soon."

Sera had been planning on leaving since the word returned to her that the police-- fools as they were-- was going to try to arrest her and any other bounty hunter in the city. That alone meant that she had to get out. She mentioned this to Cross, who blinked at her with his bright eyes.

"I know you're still recovering, but the police see me as a liability now. We can't stick around. I think we should go back to Italy." She crossed her arms thoughtfully.

Similar topics
» Worlds largest collection of vintage NIB '70's, '80's audio equipment ?
» radio round
» When is the round up?
» Hats & Leg Warmer - round looms
» Round bun tin